10 Questions With Michael Paget of Bullet For My Valentine 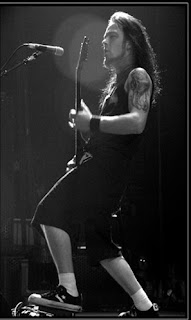 Rock House recently caught up with Michael Paget of Bullet For My Valentine for a quick 10 question interview.

RH: Your first instrument was?

MP: My first was a 3/4 size classical guitar with nylon strings. I think I saved the money from my paper route or maybe it was my birthday money; something like that.

RH: Tell me about your first guitar and how old were you when you got it?

MP: I was as about 17 years old when I got it and I couldn’t even tune the guitar for about a month.  I just kind of played one string. Then my cousin Clive, who plays guitar, came to my house and tuned it for me. Then I really started to learn some chords from the little booklet that came with it. You know, I can still remember the smell of that guitar!

RH: What was the first song you learned to play on guitar?

MP: The first song I ever learned on guitar was 'Polly' by Nirvana. Nice easy four chord riff, slow rhythm too.

RH: You are magically thrown back in time and become a member of a 70’s or 80’s Metal band, who would it be?

MP: I would so LOVE to be in Iron Maiden!

RH: Given the chance, which current guitar player would you most want to collaborate with and why?
MP: Man, there are so many that I would love to work with, but right now Billy Gibbons from ZZ Top comes to mind. For me that would be an amazing opportunity because I’m sure I could learn so much from him as a player and a fan! He is an amazing and much underrated guitar player!

RH: Aside from Metal, what other genre of music lurks inside your closet as the one you love to play and why?

MP: I love to play the Blues! About two years ago something weird happened to me, I really got buzzing on the Blues! It started with Stevie Ray Vaughan and Hendrix, and then I just started living it! I bought all kinds of vintage amps and Fender guitars, etc. I started listening to the Blues so much that I would pick up a guitar and that’s all that would come out. I thought to myself you gotta mix it up dude, otherwise it will start to show through too much in BULLET'S music! Blues is definitely a passion of mine.

RH: If you had to learn to play a new instrument which one would it be and why?

MP: I played drums years ago and would love to play them again. Back when I was starting out I had to play drums just to get into bands because there were so many other guitar and bass players at the time! I got a kit off of my other cousin Nevil, I eventually sold that very same kit to Moose, our drummer now! The drums are great because you can hit the shit out of them!

RH: Other than your guitar, one piece of gear they would have to pry from your hands?

MP: My Dunlop Wah Wah pedal! I have tried lots of different Wah pedals in my rig, but this one just seems to compliment what I’m playing so well!

RH: What advice can you give to players who are trying to develop their own sound and style?

MP: You have to discover first what you want to play and sound like. I would listen to the players that influenced me most and just learn from them. Try getting DVDs (Rock House of course), CDs or use You Tube, there are lots of resources out there now that I didn’t have years ago. I also try to just jam out on my own; I think this is the best way of developing your own personal style because it’s just you on guitar with no music.  Most important, try new and different things that keep you learning!

RH: Playing music and being in a band can at times be difficult, what motivates you to keep challenging yourself?

MP: CORONAS!  Ha ha! It does get hard on the road, but luckily for us we as a band have known each other forever, we are like brothers and we have a great crew too! I just challenge myself to some Pantera solos at the back of the tour bus, keeps me in check!
Check out more Bullet For My Valentine @ www.bulletformyvalentine1.com, www.myspace.com/bulletformyvalentine and hit the subscribe button of the Rock House Blog for updates on Michael Pagets new instructional DVD to be released soon.

Hey, I wouldn't mind collaborating with Billy Gibbons myself! Who wouldn't! Those Texas boys know how to rock! Good questions!

Amazing what you can learn about people huh?