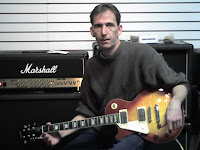 Terry White is a long time member of The Rock House Method. He is a gifted musician who gigs as much as he can. Terry is also a guitar instructor. He is a little different than most as he doesn't charge for his instruction. Terry is also very knowledgeable about guitars, amps and other gear that most of us are interested in. Terry recently got his hands on a Bugera 6262 amp head and put it to the test. The following is his on hands review of the Bugera 6262.
You can check Terry out on his my space site http://www.myspace.com/countryboy2082


Before jumping right into this I have to let you know that I have tested, used, tried, owned, or just played around for fun more than 50 different types of amplifiers over the last 25 years, all tube and solid-state alike and this is the first time in that 25 years that I am honestly impressed. And now I will tell you why.
Back in October of 2008, I decided that it was time to go out and purchase a new amplifier. I wanted an all tube design, but I also wanted to be able to play any type of music that I would choose and still use the same amplifier. Everything from Southern Rock, to the heaviest of Heavy Metal, and everything in between. Changing amplifiers in the middle of a set is not an easy task, and I have grown tired of having one amp that I can use for this song and have to either add an overdrive or distortion pedal for other type’s songs. So with that said I set out to find an amplifier that could do it all.
Well I found several that would fit that bill but the biggest problem was that all of them would have cost me anywhere from $1100.00 up to $3000.00 dollars just for the amplifier head alone. Well that was out of the question. Spending that much on just an amp head would leave no money for the many other things that are needed by any guitarists, like guitars.
Several months prior to my decision a company called Bugera had sprang up out of nowhere with an all new line of amplifiers that had been getting attention from all over the place. The amps were a big hit at NAMM that year, and the only local dealer kept telling me that I should try one of the amplifiers. He explained that because of the price of the amplifier that there was pretty much no way I could lose.
After weeks of thinking and hours and hours of research I finally decided to purchase the Bugera 6262 120 watt all tube head. Out of pocket cost to me for this amplifier was $529.00. That is one third at the very least and one fifth of what many of the amplifiers in this class were going for.

For more info on Bugera products you can check it here http://www.bugera-amps.com/
at 2:11 AM

This reads like a paid endorsement to me because the author does not mention any other brand names. He also claims the amp can do it all which I think is unrealistic for any amp. Quite a long review but sounds far more like a sales pitch.

I do believe the name of the article is "Bugera 6262 Amp Review by Terry White".

The article is his review of their amp and he obviously liked it....a lot.

the sound kicks ass, and the features are gold, but just be careful, the amp has a lot of plastic, and sometimes parts - not the entire amp - just break.

if you know how to service an amp, or know anyone good to do it for you, even with a lot of work done to them, they are still cheaper than the big names.

I have to say I have not had anything but good emails and comments about them.

Great review and dead on accurate.

I just purchased (and have been gigging with) the 212 combo version of this amp, the Bugera 6262 and it's a beast. However, calling it a beast makes it sound like a one-sided, metal-only amp. It's not. The tones I've been able to get are incredibly broad and I've been complemented many tines on the clean and crunch tones.

Last night, I played this amp at a club called The Riot Room in Kansas City. Corey the sound guy is extremely good at what he does and this venue sees a lot of national acts. He got up from the booth three times to come over and take another look at the amp. He was floored and couldn't say enough about the tone. After our set he said it again. Only had the volume on the clean and lead channels at "1" and he was using an SM57.

Interestingly enough, my buddy from the next band went up there with his very high-dollar Mesa half stack and Corey was still talking about the Bugera. That has to tell you something.

Read up on the company. View the videos on the site www.bugera-amps.com. Every component is literally made in-house by Bugera and these amps are hand-wired. Sure, stuff CAN go wrong with any piece of equipment, especially when you start bringing tubes in the mix. I load, set up and tear down my own stuff. I take care of it. I'm not concerned.

Side note: I was literally at the counter at Guitar Center, about to buy a new B-52 AT212 on clearance. THIS amp has had a lot of issues with overheating and a higher than acceptable failure rate. However, the price was in my zone and I liked the tone. Then my guy there went to take a leak and I drifted over to the Bugera combo. Pulled it down off the display, put it next to the B-52 and when he got back I told him I wanted that Bugera. He wasn't gone long. It was an instant decision based upon the tone and really the simplicity of the design.

People LOVE to bash gear sometimes. It's all good because it forces us to do more research. The Bugera line is the real deal.

Side note 2: My good friend and former bassist plays a Behringer UltraBass 210 combo for the past two years. Did 60+ live shows last year with it and probably 60+ rehearsals. It's solid as well.

The bottom line is that Behringer is a solid company and they're successful because they can offer good stuff at a lower pricing segment. They just choose to do so and have from the start. Should a Mesa REALLY cost $2000? Probably not but they can because they've got a great name and a better marketing division.

...and no, I don't work for the freaking company. Good try though.

What about the infamous power tube clip failure?? Anyone see that yet?

Just so everyone knows this is not a sales pitch. The amp really is the best bang for your buck anywhere out there.
If anyone happens to know of an amplifier that can be bought for less than $6oo.oo and still get the sounds that you can get from a 6262 I would be glad to hear about it and possible even test and review it.
And no I do not work for the Behringer Corp. I just love finding good quality sound at a great price.
And if anyone may not believe what I have said about the amplifier, go out and try one for yourself.

By the way later in the winter after my factory warranty has expired I plan to send the amp off for a Voodoo mod, and have it re-tubed. And if there are any little kinks in the amp that could cause problems later down the road that will take care of any of that.
But so far I have had no problems at all with my 6262 head, and yes it can pretty much do it all. I play everything from country to Southern Rock, to Metal and I play it all with this single amplifier. Of course I do add some effects, but do added overdrive pedals or anythin like that. No way you could need more overdrive.
For the money you simply can not beat it. And that is why I am so passionate about the 6262 is because almost anyone can afford it.
It's not an advertisement, it's just a way of letting people that can't afford $3000.00 or more for an amplifier that there are amplifiers out there for much less money that sound as good or even better.

I agree, the bugera 6262 is the most incredible amp i have played, ive played the mesa boogie dual recto, the marshall jcm2000 and compared it apples to apples with the bugera 6262, pfft! i couldnt belive that for 600 bucks you can get a balls out badass freakin amp! i use it live, in the studio, you name it, metal baby, haha. check my band out myspace.com/apdlmusic

I can respect the fact that you liked the amp and while it's terrific that Behringer replaced the amp when it blew a transformer I would prefer to spend the extra bucks and get an amp that holds up longer than 3 weeks.

They replaced it because you had only had it for 3 weeks. When 90 days is up you're screwed.

They may sound ok, but they aren't well made. Save up the extra bucks and buy something made better. It will save you some major frustration in the long run.

Actually it's not 90 days it's a year, they cover it for a year, only the tubes are 90 days and that is with any company. Marshall, Fender all of them.

How is the 6262 holding up? Any problems? Any new info about it?

As soon as time permits I will get to that follow up review I mentioned, I hope this will help at least for now.

I have been using a Bugera 6262for a bit over 18 months now and to be honest I have been surprised. I honestly thought that after a few months of being dragged from one gig to another that at the very least I would have been replacing tubes by now.

I only had a single problem after writing this review and it was of no fault of the amplifier at all. Someone walking by just happen to step up about 6 inches or so and walked a few feet across the stage we were set up on about 6 months ago. I guess the guy was trying to get around everyone faster or something like that.

Anyway when he did he actually got his leg caught in my guitar cable and then tripped and fell off of the stage. When he did it pulled the cable kind of sideways and caused the plug to snap off the input socket.

I made him pay for the repair which was about $50.00.
Other than that I have not had any issues with the performance of my 6262. Actually as the tubes got a little age on them they really started to sound a little bit better than when it was new.

So I can honestly say that after at least 18 months of playing, and I am talking about being g played at least 5 and 6 days a week, I would even use it for practice a lot of the time. The amplifier just kept right on kicking.
So as far as durability, well so far so good.

Nice amp, indeed. I play death metal and decided to purchase a new amp a few weeks ago. after some tests and research I go for 6262, cause I need a beast with both lots of gain and readable tone at the same time, and this one has it. When I played it for the first time, I totally fell in love :-D I think its the best buy for the price. I'm getting it today, looking forward to it :-)