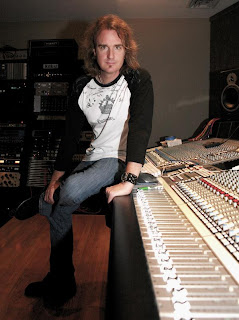 I had the opportunity to sit down and have a conversation with David Ellefson recently. David is one of those musicians that probably does not need too much of an introduction. Just about anyone who is into playing the bass guitar or has listened to him play in anyone of the bands he has been involved with throughout his career knows that David is one of the most well known metal bass players in the business. A current and founding member of the band F5, David continues to rock the big stage and walks his own path as a musician and in many other musical aspects as well.
The Early Days
I wanted to know what that thing was in Davids life that lit his fire to begin his quest in music. To do that, I needed to find out about his beginnings with music. Davids early influence came from his mother. “My mother sang in the church choir, she was musically inclined and she always had music playing, I can remember at 4 or 5 years of age listening to those old 12 inch vinyl records. So she was really my first introduction to music. She also had an old Wurlitzer organ that she played, it was one of those fancy ones with a cassette deck in it and I remember at about age 6 or 7 taking some lessons on that, which would have essentially been piano lessons”. This would be where David learned to read music. Both treble and cleft, so he was learning at an early age how to coordinate his left and right hand plus use his feet on the pedals to keep a beat. David started to further his musicianship in 5th grade when he took a music elective in school. “I took band and chose to play the saxophone, basically because I thought it looked really cool. I played that pretty much through my high school years’.

What about the bass David? “Well it was about age 11 when I picked that up. I can remember riding the school bus at that time and I had a pretty long ride of about an hour because I lived in the country on a farm. I had a couple cool bus drivers that would listen to WLS out of Chicago. That radio station would play popular music at the time like Styx and Sweet you know stuff that would be pretty heavy for the time. That’s when I got turned onto that and of course that’s when bands like KISS and guys like Ted Nugent were coming on the scene. Listening to those guys is what inspired me to want to play bass.”

David told me that without a doubt guys like Gene Simmons were definitely an influence on his playing. “I look back on what Gene was doing with the bass playing especially his playing on the early KISS records and knowing now that he was a big Beatles fan, I listen to his music and it’s basically full of Paul McCartney bass lines which are really these old German pub walking bass lines. Gene has just been an inspiration to me as a survivor in the music business and as an entrepreneur I admire what he does”.

Listening to bands like KISS, Van Halen, Judas Priest, The Sex Pistols and The Ramones was what got David into metal music and punk rock. “Of course, all that morphed over into AC/DC and Cheap Trick. Right about that time Judas Priest came out with their album “Unleashed in the East” and that really changed the course of music for me because that was my first introduction into bonafide British heavy metal music”.

David always knew what he wanted to do. His goal was to make it to the big stage in a heavy metal band. Moving to Los Angels at age 18 and not looking back. Ellefson was to follow what was the movement of bad boy bands like Motley Crue . “They were spearheading the whole glam meets west coast metal thing and the whole rowdy bad boy thing was part of that.” David said. “That wasn’t what I was really into so I was glad when I met Dave (Mustaine) and what we were into was going to become the wave which was pioneering the thrash metal movement of metal.”

“At age 16 it just really hit me, I can remember playing with some buddies in an old farm building my dad used to let us use and it just hit me” David told me that he just never wanted to do anything else. “You know I would take those tests that would tell you what career path would be good for you and it always came up like I was supposed to be a fork lift driver or something. There weren’t any categories for being a rock star; it’s just not really part of their scope”.

So David packed up after he graduated from high school, emptied out his savings account of about 700 bucks and headed to the west coast. “My advice to all musicians is if that’s what you feel like you want to do then just go do it. And go do it when you’re young. I had no plan “B”, I didn’t have anything to fall back on, all I had going for me was my music, my bass and my ambition and now that I am older I look back at all entrepreneurs in this world and that’s all they had you know, they have a gut instinct and some skill and a lot of ambition. So at 18, five days after I graduated, my buddies and me got into a van that my dad gave me and off to California I went.

In part 2 we will continue talking to David about his early days and how he was inspired to help other musicians with the business aspects of the music industry.

Be sure to check out Davids web site http://www.davidellefson.com/ and the F5 site at http://www.myspace.com/f5thebandaz
at 3:02 PM

Great stuff on David! Can't wait for the other two parts!